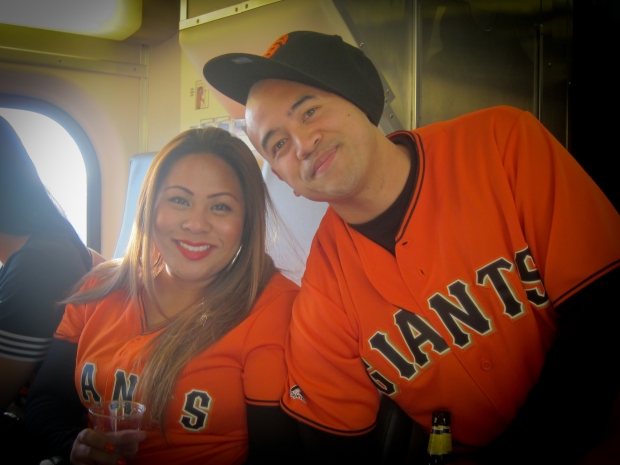 Jennifer (the birthday girl) and Justin

I thought it be best to put this up, especially since the San Francisco Giants are currently #1 in the NL West. Yeah, you heard me! They may have lost today against the Atlanta Braves, but you can’t win them all!  But did you guys catch last night’s game? Giants got them in extra innings!

Back to the photo diary…

If you’ve read my last post, I went to a game back in May. Well, I went to this game (Battle of the Bay) that same week, just a few days later. The occasion: Jen’s birthday!

She planned everything out and got a group of our friends together. Keep in mind, this was her first MLB game as well.

I felt like a season ticket holder being at AT&T Park twice in one week.

We took the train, met up with the rest of our group, and head to the ball park. I got my usual Crazy Crab sandwich. Actually, after finishing the first one, I went back for seconds. And those little sandwiches aren’t cheap either! I was a bit ashamed when the lady at the register recognized me. But hey! They’re that good!

I spent most of the game walking around the stadium. Majority of the group did the same.  Everyone kept leaving for more beer & food. There were many bathroom breaks as well. I don’t think there was a moment when we were all sitting at the same time.

It doesn’t matter though, because I know that we all enjoyed the game. Here’s some pictures from that day! Enjoy! 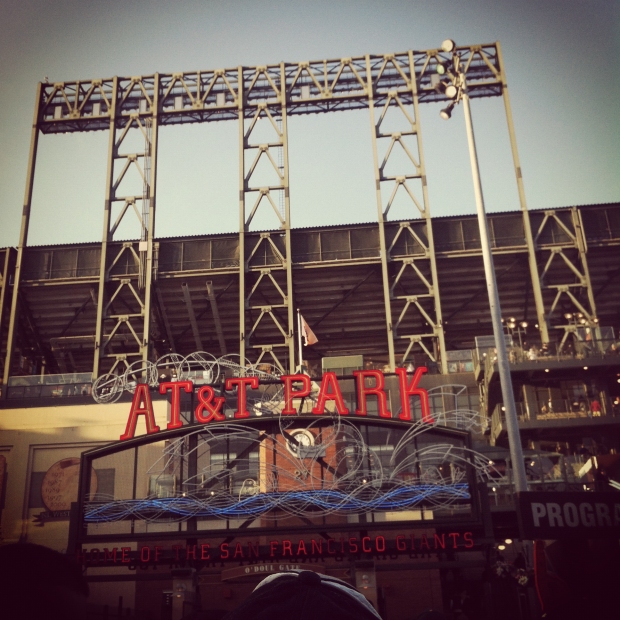 My obligatory picture of the entrance. This was for Instagram!

Got to meet up with my cousin!

Here’s a little story about Jennifer (shown above)….

For as long as I’ve known her (almost five years) and Alan has known her (his whole life), we weren’t aware that she is an Oakland A’s fan!! How did we miss this?

Well, her husband is a Giants fan and they go to many  games. They were also very lucky enough to witness the Giants win the World Series in 2010 at the Rangers Ballpark!! I’m still jealous!

So you can understand how it was very easy for me to assume that she was a Giants fan. I literally discovered the truth that day and was in shock to see her decked out in her A’s gear. Oh well. I love you either way cousin!!

The view from our seats 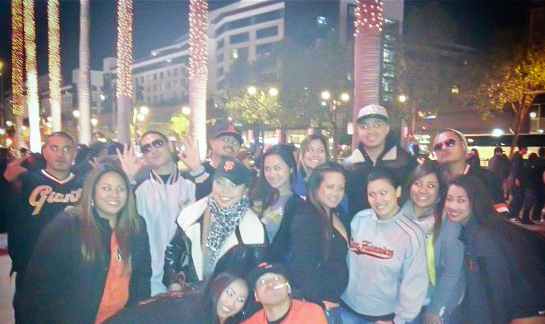 The Giants won against the A’s (8-6). Barry Zito got to pitch and beat his former team. I personally like to say that the Giants won for Jen’s birthday!

So far I’ve only gone to three games this season and my record is 3-0 in attendance at AT&T Park.  Not bad!!  Good luck charm, maybe?! I will come up with any excuse to use my superstition…

But I don’t have any other games planned as of yet. Can someone please take me to a game?!  You may think I’m joking, but I’m not. I’ve been craving that Crazy Crab’z sandwich!!

Hopefully I’ll be able to make it out to one real soon!

All photos edited by Melissa Datu.