On our way to AT&T Park for another date night!

This timing of this post depended on the outcome of today’s game. I was either going to “take my time” or blog as soon as possible after Game 3.

So now that this is obviously up on the same day, we all know who won! Giants baby!! I’m ready for more torture!

And as the motto “One game at a time” rings in every Giants fans’ ears, let me take you all back to the game that brought us here in the first place…

Alan and I were talking about going to a Giants game before the season ends. We sure chose the right game to attend. It was perfect. I had that Saturday off and extra money to spend, so I purchased bleacher seats for yet another date night at the ballpark.

The San Francisco Giants were on fire! It was their second game in the series against the San Diego Padres, and they were on a five game winning streak.

It was down to that magic #1! Could the Giants really clinch the NL West division? Well, let’s just say that the Pablo Sandoval gnome wasn’t the only new item that was brought out to the public at AT&T Park.

As Sergio Romo gave that final strike in the 9th inning, the merchandise booths and the Dugout store began pulling out the new NL West Champions shirts. Lines were forming as fans from all ends of the park wanted (excuse me…needed) to get their hands on the new threads.

The Giants beat the Padres 8-4.

It felt like New Years in San Francisco. People chanting, “Giants! Giants! Giants!” throughout the streets, made the whole scene seem surreal. I couldn’t believe it!

It was the game that won the West and we were there!

So, in case you don’t believe me, I’ve got some pictures to prove it. Sorry, I was too busy being in the moment to take a ton of them.

Either way, I hope you all enjoy the very few that I post.

I had to get my Crazy Crab’z sandwich! 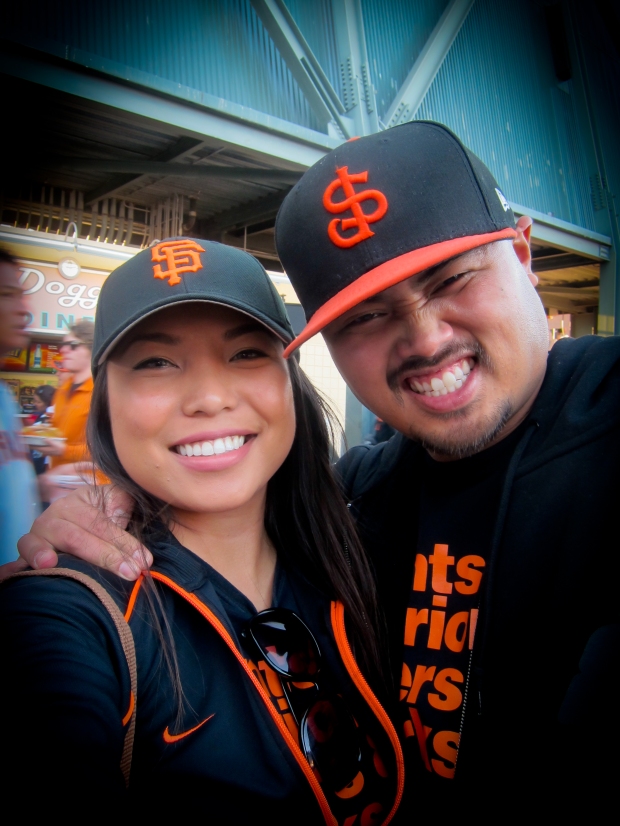 P.S. That day was our 4 years and 9 months anniversary.

Personally, we don’t celebrate every month (I think it’s a bit cheesy if you ask me), but the fact that we were at THIS game on THAT day, made it pretty special. All the more to celebrate!

Like I said earlier, they were giving away limited Pablo Sandoval gnomes that night. Unfortunately, we weren’t able to make it early enough to get one. BUT! We were able to hang out with one! 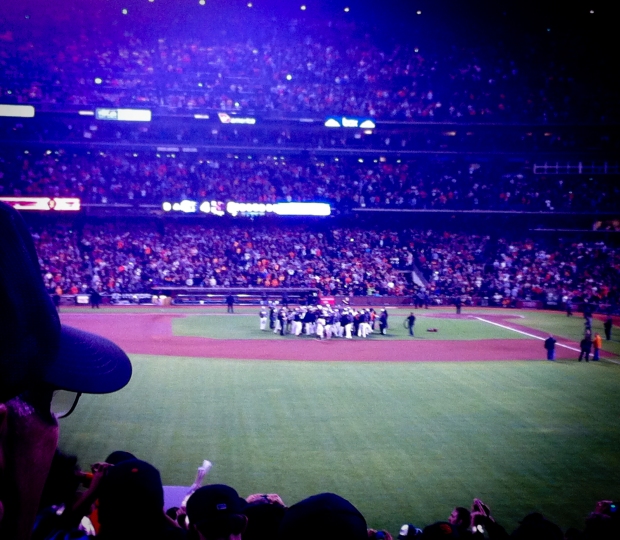 They did it! The National League West Division Champions celebrating on the field!

All the hard work that season, and all the ups and downs led to this moment. Clinch! It definitely was sweet torture, and I loved every minute of it. This is the game that put the San Francisco Giants in the post season. This is why we still believe!

While we celebrate a win in the series against the Cincinnati Reds tonight, we must prepare for another game tomorrow. One game at a time boys.

Just one game at a time!